Karibu! Follow my adventures this summer with Duke Engage and the EWH Summer Institute in Tanzania!

Last Friday we went to work at Mt. Meru Hospital again, and had another productive day... though I would think not as productive as the first thanks to a pair of very cute little kittens who continually pounced on us and tried to play with the equipment while we worked.
I worked with Ray and Oriane on a centrifuge that the staff had told us would display time and speed values but would not spin. We inspected the machine and after taking it all apart and examining the circuitry and motor, we determined that the problem was simply with the lid latch (centrifuges will not operate if the lid is open for safety reasons). The latch had become completely detached and was laying loose inside the centrifuge (in fact, it fell out of the machine when we took it apart and we didn't even know what it was at first). We found a couple screws that would fit, returned the latch to its rightful position, hooked the centrifuge up to power, and crossed our fingers. It worked! We returned the machine to the lab and they were very thankful for our work.

On Saturday, Benita and I went to the Meserani Snake Park with some other EWHers, and Brenda (our 13-year-old sister) came with us. We got to see lots of exotic snakes, and there was one which we were allowed to hold. I was really excited and was the first one to hold it. I watched it slither around my arms for a couple minutes and then the handler took it out of my hands and put it around my neck. It adventured around through my hair and hissed in my ears (which tickled a bit), and everyone else in my group was somewhat shocked to see that I wasn't bothered by it. Benita and Brenda were both rather hesitant, but we eventually encouraged Brenda enough to hold just the snake's tail. 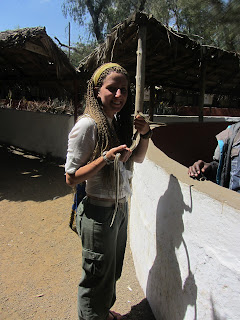 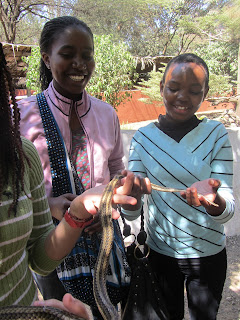 After the snake park, we all went for camel rides provided by the Maasai village nearby. While the camels were walking, it wasn't so different from riding a horse, but the standing up and laying down were pretty rough. You've got to hang on while the camel's back jerks back and forth to get its long legs placed correctly beneath. 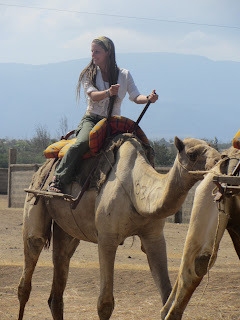 On Sunday, Benita and I went shopping in Arusha. I bought a kitenge that I plan on getting made into a skirt and perhaps another garment if there is material left over. Also, Benita and I bought another one to have hospital scrubs made. We are going to be one stylish pair. They're supposed to be finished today, and I'm really excited to see how they look!
Posted by Unknown at 3:17 AM